Let’s change that title to a sort of sad good-bye to our sort of dear old van. Oh, and when I say old, I mean OLD… Like, really old… We owned our big white van about 8 years. When we got it, it was about 15 years. Which equels… *quickly does the math* 23 years old. Old.

Our van even had a name! It was called, “The Big White Van”. How obvious…

Part of the reason we sold this van, was because it was too heavy. For some reason, American vehicles that are too heavy are not allowed to pass through the border. Since it was American, it was allowed into the U.S. one last time, but not back into Mexico, which was a problem.

I tried to find a picture of our beloved instrument of torture (Don’t worry, I’ll explain!), but I couldn’t find a good one, so this will have to do.

It had an exceptionally high roof.

The reason I called it an instrument of torture, was because it almost was. Not quite, but almost. It was SO bumpy, and had holes all through it, allowing the dust to get in. Which is not helpful when you are driving on dirt roads most of the time. I feel like sneezing just thinking about it.

After we sold it, all we had left was this 8 passenger car. So all 11 of us would squish ourselves into it whenever we wanted to go anywhere, 5 or 6 people in 3 seats. Uncomfortable when your going on long, bumpy trips. And sometime we would pick up passengers, to take places, and we’d be even more squashed.   😦

We were all VERY happy when Dad finally bought a new van. It’s white like our old van, and almost as big. Oh, and guess what! This new van doesn’t have holes in the floor!!! :0

As of this moment, it’s still so new (to us!), that most of us kids still have not ridden in it yet. Everyone is begging to go somewhere…anywhere… I, however, am looking forward to driving it!!! 😀 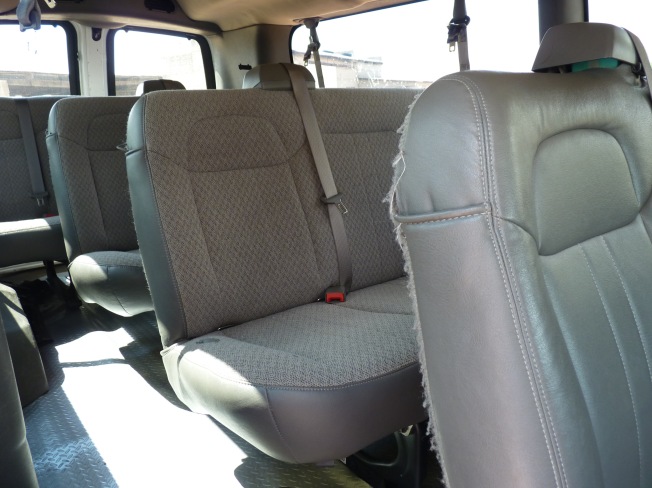 Well, anyway, that’s the latest Marr family news! We are currently looking forward to all fitting nicely in the same vehicle, and not breathing dust into our lungs, at the same time.

Please leave a comment!I would love to hear from you. :) Cancel reply

My name is Rosy Marr and I am 18 years old. I am a daughter of the King, and I love Jesus with all of my heart! Some of the things I love doing are practicing my art and photography skills, singing, playing instruments, blogging, writing letters, and more! My family is missionaries the Tarahumara Indians of Cuauhtemoc, Chihuahua in Mexico. Please pray for us as we seek to serve the Lord in every aspect of our lives down here! :D