Hey everybody! Today I am happy to be participating in my friend Malachi’s blog tour! I will be interviewing him about the cool book he just published called, Through all Things.

Before we start though, let’s take a look at what this book’s about.

Loved ones must be rescued.

His brothers depend on him for survival.

The trail behind him is already stained with pain and loss.

Allen is only seventeen, but tragedy and a strong sense of duty already weigh on his shoulders. As the French and Indians wage brutal warfare on the English settlers, Allen embarks on a treacherous journey to free his captive sister and her friend.

With little hope of survival and even less for success, Allen knows he needs God to do the impossible. But if God is able to do all things, why does everything seem to be going wrong? 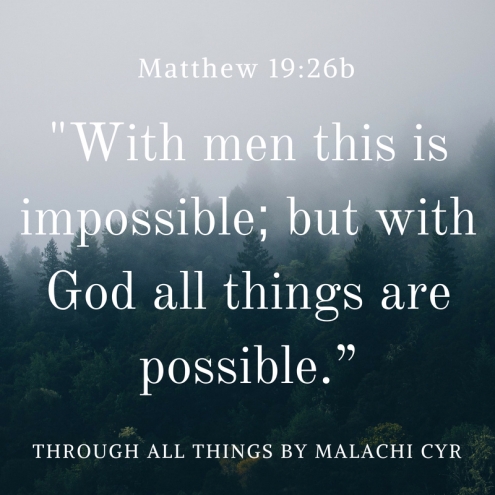 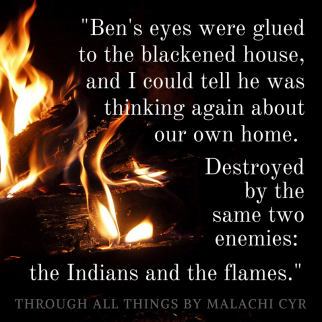 Looks pretty good, huh? Well anyway, on to the questions!

What inspired you to star writing “Through all Things”? 💡

There wasn’t exactly a single inspiration, but if I had to pin it down to one thing, it would be the movie Alone yet Not Alone. I actually started writing it a long time ago in a little composition book. As far as the story went, the only similarities were the basic concept of Indians capturing his family and his name. It wasn’t even the same voice, since it was in third person, while now it’s in first person. I tried again a few years later in another composition book, and that second try shaped some more of the story and set the time period and switched to first person.Watching Alone yet Not Alone kinda got me re-inspired about it, so I decided to pick it up again because I already had the idea and I needed a project for NaNoWriMo.

What was the hardest part of writing “Through all Things”? 🤔

That depends. As far as logistically, it was either the standard problem of Writer’s Block or having the patience to go through the document over and over again during editing. There were difficult to write because of what was going on in the story emotionally. I can’t say anymore about that subject or I’ll be throwing spoilers all over the place 😉

Who is your favorite character? 👥

Ooh, that’s tough. They’re all different, and I like them in different ways. In certain ways Allen is a lot like me, so I can connect with him pretty well. I like Ben’s personality and how wise he tends to be for such a little boy. I like Charlie more and more throughout the story as he grows and matures. I like Jess, I like Betty, I like Jason. Pa was really cool. I got to like Nootau by the end. So if I have to choose one character that is my favorite, it would have to be Behr. He is such a awesome, faithful, big, Newfoundland dog, and the way he–wait, I’m trying not to give away spoilers…

When you first started writing Through all Things, were you originally planning on publishing it? 📘

How long have you been writing? ✍🏼

For a loooong time, but never seriously until I joined Noble Novels in 2015. Then in 2016 I was challenged to join a few friends for NaNoWriMo two weeks before it started. I did, and wrote my first book, Agent C (it’s not in print.) From there those same friends got me into the world of self-publishing.

Do you have a favorite quote from Through all Things? If not, maybe just name one or two that you like. 💬

That’s tough. I think I like the last little bit best as far as the story goes.

“We’ll do it, Jess. We’ll make this place a home again,” I said with a sigh.“Is it even possible?” Jess asked again after a moment. I nodded and answered with a smile, “Yes, Jess, it is. For with God, all things are possible.”

There were other parts I liked too, but that’s the easiest one to throw out there. Most of the other quotes take too much background to understand or give too much away. My sister’s favorite quote was on page 199, while one friend’s favorite was a few paragraphs on page 177-178 (Why he thought it was so funny I don’t know. Maybe his fellow redheads will understand.) *Laughs* *Wants to read the book even more* XD

What is the reason that you wrote and published this book? And what is your goal for it to accomplish? 🛣

Well, for one, I want all my writing to honor and glorify God, and that is the primary reason. Along those lines there is the fact that there is a lack of clean, edifying, God honoring fiction, and I want my book to be a story that is not only exciting, but something that is worthwhile to read (for which reason it may be good to add that I wouldn’t recommend it for younger readers, due to a couple of violent fight scenes.)

I also hope to encourage my readers to trust God, even when we can’t see what’s going on, and even when there’s no guarantee of a happy ending (not everything ends happily in this book). It’s a common theme, yes, but there will always be suffering and hard times, and the same question “why is God doing this?” is often asked. Not that I’m a great writer that will profoundly affect anyone, but I do hope it can be an encouragement to someone somewhere.

And there’s one more reason I wrote/published it, though it’s not as impressive as the others. That reason is because it’s just plain and simply a lot of fun to write.

Do you plan to publish any more books in the future? 📚

Lord willing I do hope to. The difficulty is that life is busy, and writing takes time. I’m hoping to schedule my time so that I’ll be able to spend a little time at least to write. Right now I’m working on my next novel, The Minstrel. 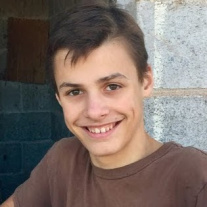 Malachi is a Christian, homeschooled teenager who highly enjoys putting the stories from his imagination down on paper. He enjoys reading, writing, airsofting, sword fighting, frisbee, woodworking, Bible studies, working with his Dad, hiking, camping, generally doing stuff with his friends, and too many other things to count.


He writes to:
1. Glorify and honor God in his stories.
2. Make the stories that he’s played up in his head come to life.
3. Have fun.

Thanks for visiting, and answering those questions for us, Malachi! It was super fun and informative, reading the answers.

Is anyone else as excited as I am to read Through all Things?

Oh… And guess what. There’s a giveaway, too! Today is the last day it’s open, so you’d better hurry and enter. Check it out!

Please note: If you’re not in the US, you will be able to win a Kindle version of “Through All Things” and a $20 eGift card to Amazon instead!

Please leave a comment!I would love to hear from you. :) Cancel reply

My name is Rosy Marr and I am 18 years old. I am a daughter of the King, and I love Jesus with all of my heart! Some of the things I love doing are practicing my art and photography skills, singing, playing instruments, blogging, writing letters, and more! My family is missionaries the Tarahumara Indians of Cuauhtemoc, Chihuahua in Mexico. Please pray for us as we seek to serve the Lord in every aspect of our lives down here! :D